How Peanuts Are Grown

There are three main types of peanuts grown in Australia: 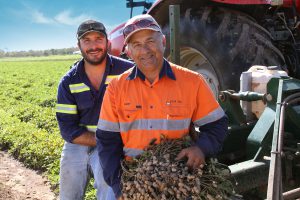 In Australia, peanuts are grown in Queensland, the Northern Territory and northern New South Wales. In the past, trial peanut crops have also been planted in South Australia and Western Australia.

Most peanuts in Australia are grown in Queensland. Major growing areas occur on the Atherton Tableland near Cairns, Emerald in Central Queensland, Bundaberg and Childers, and in the South and Central Burnett regions west of Brisbane.

Kingaroy, the home of the Peanut Company of Australia, is the biggest town in the South Burnett and is known as the “Peanut Capital of Australia”. The first peanuts grown commercially in Australia were planted nearby and peanut processing remains a cornerstone of the local economy.

First the taproot of the peanut bush is cut by a mechanical digger with a blade running just below the peanut pods.

The bush and pods are lifted by the digger, shaken to remove excess soil, turned upside down and left to dry in windrows (rows created during digging).

Growers must take into account the likelihood of rain as it’s better to have peanuts dug up and inverted during wet weather than in the ground.

Inverted peanuts will shed moisture and dry out quickly. Peanuts that are not well inverted and in contact with the soil will not dry quickly and risk going mouldy if it rains. 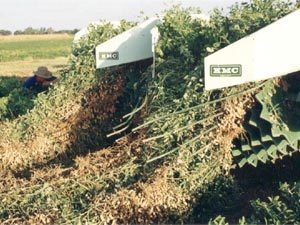 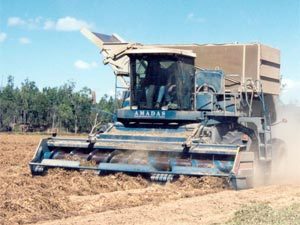 The second stage of the harvesting process is threshing, ie removing the peanut pods from the inverted bush. Peanuts contain 40-50 per cent moisture when dug out of the ground. This level must be reduced to less than 11 per cent before they can be safely stored. Leaving the pods to dry in windrows in the field is cost-effective however leaving them too long can be risky, exposing them to damage from rain, birds and over-drying. PCA encourages farmers to artificially dry their crop and also offers drying facilities at intake centres.Modern threshers will remove peanuts from the bush under almost any conditions. Peanuts can be threshed at moisture levels well above 25 per cent however the extra cost of then artificially drying the peanuts may offset the advantage of earlier threshing. Conversely, if peanuts are allowed to dry in the field to below 16 per cent before threshing, losses increase. Peanut pods are lost and kernels damaged. The loss of quality which occurs when peanuts are threshed below 16 per cent moisture level is usually more than the cost of drying. The target moisture range for threshing is 16-18 per cent.

Peanut quality is maintained after threshing by slowly lowering the moisture level in the crop at low temperatures. Peanuts cannot be dried fast at high temperatures like many grain crops. The farmer first passes the crop through a pre-cleaner which removes extraneous matter before moving the peanuts to drying bins. This process can be completed on-farm or at PCA’s drying facilities at Kingaroy, Gayndah and Tolga. Curing too fast will increase the number of split kernels and loose skins. The maximum moisture removal rate shouldn’t exceed 0.5% per hour.

What happens after the peanuts are delivered to PCA?

Firstly samples are taken to assess a variety of characteristics. The loads are then dried, to ensure safe storage. The drying facility runs 24 hours a day during the intake season and can handle 140 tonnes of peanuts daily. The peanuts are stored in Kingaroy’s famous silos and are segregated based on a number of criteria.

Peanuts arrive at PCA from South Burnett farms from March to June. Farmers’ stock from the Central Burnett, which has been stored at the Peanut Company of Australia’s Gayndah depot, is brought to Kingaroy during July-August. The Northern Territory crop arrives by road in September-October. Peanuts arrive at PCA’s Tolga depot on the Atherton Tablelands from April to July. They are shelled, graded and transported to Kingaroy throughout the season.

When a decision is made on what stocks will be shelled, conveyors carry the peanuts from the silos to the shelling plant. At the shelling plant, a rotating drum gently cracks the peanut shells. The cracked shells are aspirated off, collected and sold for use in stock feed and as garden mulch.

The remaining kernels are gravity-sorted on a tilted sorting table. Heavier material (foreign matter such as sticks or stones) moves upwards and lighter material (the kernels) moves downwards. Any unshelled peanuts are returned to the shelling plant for reprocessing. The kernels are now graded according to size by passing through a number of sieves.

The graded kernels are packed in cages in cool storage while a sample from each batch is sent for laboratory analysis. When a clearance comes from the laboratory, a decision is made on whether the kernels will be sold to the raw market or be sent to the blanching plant for further processing. Product destined for the raw market is colour and laser-sorted and inspected for quality prior to packaging.

The PCA shelling plant can process up to 12 tonnes of kernel an hour during the peak season. 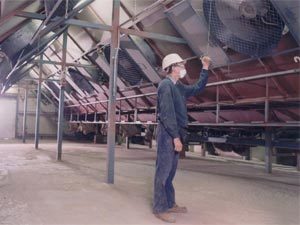 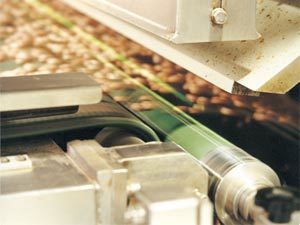 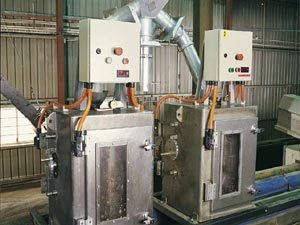 Sophisticated machinery removes the skins from the peanut kernels

Blanching is the process to remove the skin from the peanut kernel. This is an important part of the processing procedure carried out at PCA’s Kingaroy plant. Blanching is a continuous operation at Kingaroy with kernels moving at the rate of up to 8 tonnes an hour.

First the peanut kernels, either whole or halves, are run through a large drying oven with six heating zones and four cooling zones. This process does not roast the peanuts but prepares them for skin removal. Whole nut kernels then run along two parallel rotating abrasive rollers. The rollers are set about 5mm apart and the “skins” are stripped away as they pass along.

Peanut halves, or “splits”, pass between a rotating rubber belt and a fixed stationary rubber plate. The distance between these can be adjusted to control the degree of blanching. After they are blanched, the kernels move to the sorting area.

After blanching, the peanut kernels are laser-sorted. Laser sorting automatically removes any discoloured kernels or foreign material as detected by blue, red or infra-red lasers which scan each individual kernels.

These laser scanners can detect millions of colour variations down to a size of 0.5sq mm and make over 100,000 decisions a second as the stream of peanuts pass through the air.

The discoloured kernels are removed from the product stream by a blast of air. PCA has several digital in-line scanning cameras in Kingaroy to handle the massive flow of peanuts.

An x-ray sorting machine, also ensures that foreign matter is removed from the product stream. However, there is also human quality control in place. After colour sorting, the peanut kernels pass on to picking tables where PCA staff members carry out quality inspections. 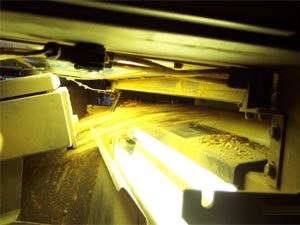 Blue, red and infra-red lasers scan for defective peanuts and remove them from the final product stream

The by-products of every peanut harvest are all put to good uses:

Shell
Once the shell casing is removed, it’s sold for a number of uses such as mulch for gardens or stockfeed that is hammer milled to allow it to be added to animal feed mixes.

Meal
When the peanuts are crushed for crude oil, a by-product called “Meal 42” is produced. This Meal 42 is high in protein and still contains small amounts of peanut oil.
“Meal 42” is sold for:

Screenings
Screenings are removed as the peanuts (“farmers’ stock”) are unloaded before going into the silos. These screenings consist of shell, loose kernels and other matter. Screenings were formerly sold as stockfeed however they’re now directed to the oil crusher.

Crude Oil
Peanut processing at PCA is very environmentally friendly with all production waste going for oil crushing. The oil that’s produced is called “crude oil” and is sent to a refiner via food-grade tankers for further processing. The finished product is a refined and deodorised oil which has a very high smoke or flash temperature and – as such – is perfect for frying.

Hi Oleic: The Best Peanuts Yet